Welcome to the November 2017 edition of tea subscription! As usual we have four exciting new teas to share with our subscribers this month.

The first light tea this November is Ruan Zhi Oolong, a light and floral oolong from Santikhiri in Northern Thailand. The second light tea is Sencha Kukicha from Kagoshima, Japan; a interestingly complex tea combining both savoury and sweet flavours. For November’s darker teas, we opted for Ruby Ruan Zhi, a dark version of the Ruan Zhi oolong; a wonderfully fruity and complex black tea. And finally we selected a popular classic black tea from Sri Lanka, Ceylon Silver Tips, a tea with a balanced and deep flavour.

Our Discovery subscription boxes contain 10g taster pouches of all of the above mentioned teas. As always, if you are a subscriber you will benefit from a 10% discount on all teas from our tea shop!

Let’s get into some further information on all the teas featured in our November tea subscription boxes! 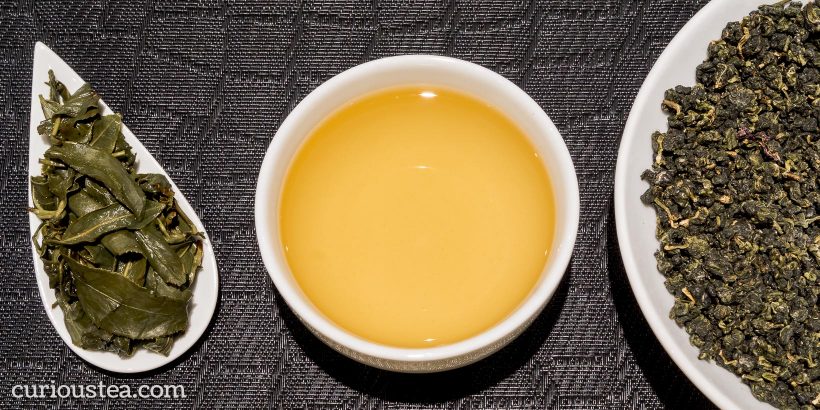 Santikhiri Ruan Zhi Oolong is a lovely light and floral oolong made from a ‘Ruan Zhi’ cultivar. It is a high mountain oolong grown at an altitude of around 1,200-1,600 metres and was plucked in Summer 2017. This is an oolong counterpart to our Santikhiri Ruby Ruan Zhi black tea that is also featured in this month’s boxes.

This oolong is made from the Taiwanese Ruan Zhi or ‘Soft Stem’ (軟枝) cultivar that is favoured for lighter floral oolongs. Confusingly, this is the same cultivar as the highly prized Qing Xin or ‘Green Heart’ (青心) cultivar. The difference in the name for this cultivar comes from the fact that the Ruan Zhi cultivar was originally brought over from mainland China to Taiwan. Over time it went through a selection and propagation process that has significantly altered the plant. There then seems to have occurred a split in the naming convention of this cultivar. Our tea master in Taiwan confirmed to us that the Ruan Zhi and Qing Xin are one and the same (and different from the Bai Lu TRES #17). Farmers and people that work with the leaf tend to refer to it as Qing Xin, while tea writers and people around Taipei tend to stick to the older name of Ruan Zhi. The grower of our Thai teas refers to this oolong as being from a ‘Ruan Zhi’ cultivar, so we decided to adopt the same name on this occasion. 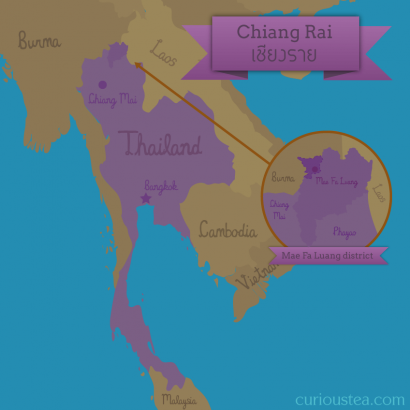 This Santikhiri Ruan Zhi Oolong comes from around Santikhiri village (formerly Mae Salong) that is located in Mae Fa Luang District and around the highlands of Doi Mae Salong mountain, close to the border with Burma and Laos. When this area of Thailand went from growing opium poppies to sustainable tea growing, many tea cultivars were imported from Taiwan in order to quickly establish a booming tea industry. Taiwanese cultivars were particularly attractive since they matched well the growing conditions of northern Thailand. Furthermore, many consider Taiwanese teas to be of fantastic quality hence fetching a premium price, something Thai tea growers were understandably attracted to. It is safe to say that while teas grown in Thailand still have some way to go in matching the top tier Taiwanese teas, the offerings from Thailand are certainly of very solid quality and generally are at an attractive price point for tea lovers.

Santikhiri Ruan Zhi Oolong comes in tightly rolled leaves that have the appearance of a classic green oolong. It produces a medium golden liquor with a light fresh aroma and a hint of creaminess. The well balanced flavours are light and floral with a defined citrus edge. A very balanced yet floral oolong with a refreshing and comforting character.

It is best brewed at 90°C for 3-4 minutes and should be brewed multiple times.

You can also buy Santikhiri Ruan Zhi Oolong tea in our online shop. 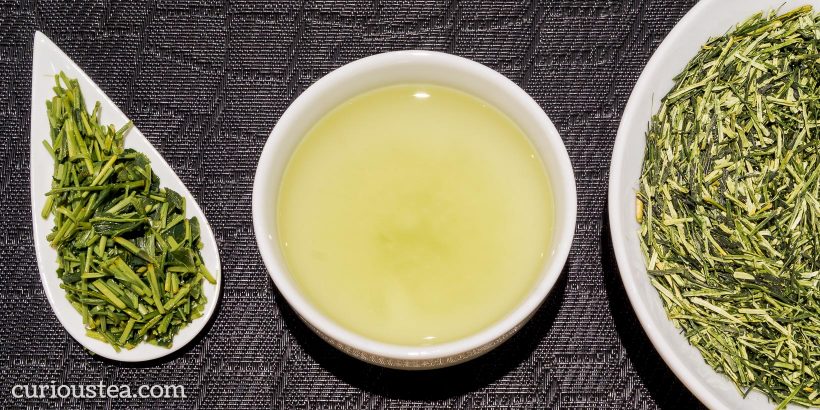 Kirishima Sencha Kukicha (霧島煎茶茎茶) is an unusual green tea from Japan that is made from fine sencha tea leaves as well as stems and stalks that are removed during the production of sencha. Because of the presence of the tea leaf stems, it is also known as ‘twig tea’. The addition of the parts of a tea plant that are normally excluded from tea production results in a unique sweet yet grassy flavour that is strangely satisfying and a little addictive.

This green tea comes from the foothills of Mount Kirishima in Kagoshima Prefecture, Kyūshū. It is grown at an altitude of around 400m above sea level. As Kyūshū is the most southwesterly island of the Japanese four main islands, it enjoys a rather mild climate. But it can still get cold in the highlands, which are covered in snow in the winter months. The seasonality of the region requires frost hardy cultivars to be used, which tend to grow leaves slower, resulting in more flavoursome teas.

Kirishima Sencha Kukicha is a mixture of dark green sencha leaves and lighter yellow stalk pieces that are the stems. The presence of the stems results in a flavour that is a little different to the usual Japanese green teas, while also being naturally lower in caffeine. The liquor is a slightly cloudy yellow and green colour with a soft vegetal and savoury fragrance. The flavour is gently sweet with toasty vegetal notes. We find that this tea is quite multilayered in flavour! It starts with vegetal umami notes reminiscent of nori seaweed, which are closely followed by somewhat fruity middle notes. It is then topped off by a gently sweet and floral aftertaste.

It is best brewed at 70°C for 1-2 minutes, with multiple infusions. This particular tea is also very low in astringency so you can try brewing it for longer (3-4 minutes) than normal with green tea. The resulting flavour will be sweeter and more intense.

You can buy Kirishima Sencha Kukicha green tea in our online shop. 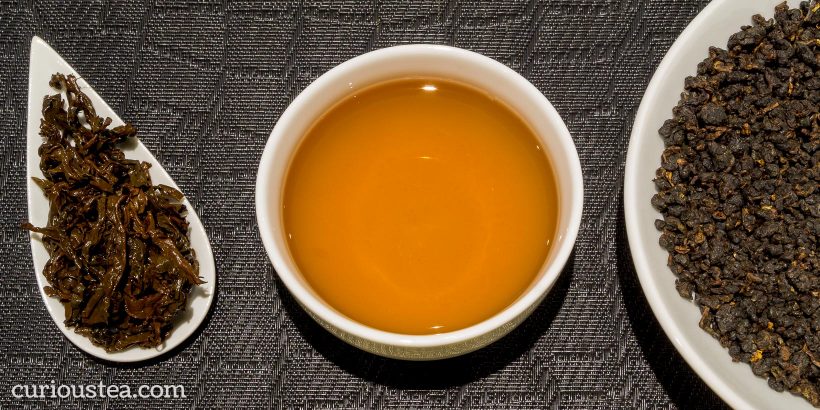 Santikhiri Ruby Ruan Zhi is a complex black tea made from a ‘Ruan Zhi’ cultivar. It is a high mountain tea grown at an altitude of around 1,200-1,600 metres and was plucked in Summer 2017.

Just like the Santikhiri Ruan Zhi Oolong above, this black tea is made from a Taiwanese Ruan Zhi or ‘Soft Stem’ (軟枝) cultivar that is favoured for lighter floral oolongs. However while the oolong version of this tea is only slightly oxidised (around 20-30%), this black version is allowed to undergo almost full oxidation. It is still probably a little off being 100% oxidised, so it’s a transitional tea somewhere between a dark oolong and a black tea. Based on the flavour profile, however, we do class it as a black tea.

This Santikhiri Ruby Ruan Zhi black tea comes from around Santikhiri village (formerly Mae Salong) that is located in Mae Fa Luang District and around the highlands of Doi Mae Salong mountain, close to the border with Burma and Laos. As it is made using a Taiwanese cultivar, the heritage of this tea is quite obvious to those who have had some of our fantastic Taiwanese black teas. The profile of this tea is complex yet very balanced. Just like the best of Taiwanese black teas, this tea from Thailand exhibits a variety of sophisticated flavours that are bound to appeal to discerning tea drinkers.

Santikhiri Ruby Ruan Zhi black tea comes in small tightly rolled leaves that are very dark in appearance, resembling dried currants. The leaves are quite a bit smaller when compared to the oolong version, due to the heavier oxidation process. The liquor produced is dark amber in appearance with a little green tint. It has a slight cinnamon and wild honey aroma. The character of this tea is complex yet light and very brisk in nature. The flavours are stony and fruity with a tangy taste that is neither astringent not drying. There are pronounced wild honey and cinnamon notes present that makes this tea quite comforting and warming in nature. A real delight especially during the colder winter months!

We suggest brewing at 90°C for 3-4 minutes according to your taste. It can be brewed around 3 times depending on your taste preferences. 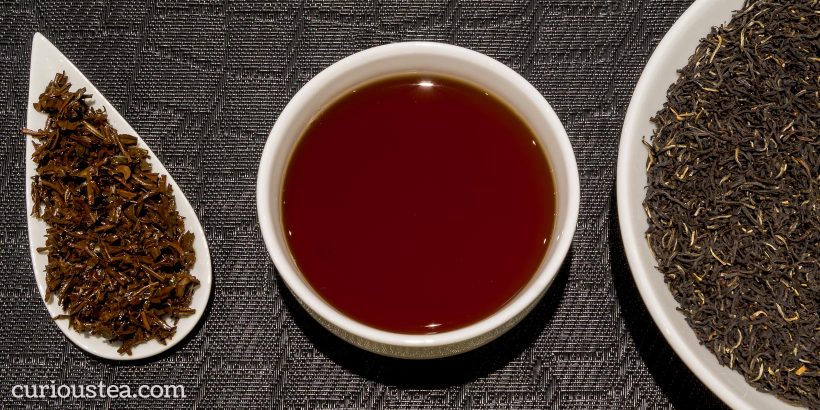 Ceylon New Vithanakande Silver Tips is an extremely well made black tea that comes from the New Vithanakande tea estate in Ratnapura, Sri Lanka. The ‘Silver Tips’ name comes from the appearance of the leaves as they feature silver or slightly golden tips, which signifies the high quality nature of this tea. This tea is an Orange Pekoe, grown at low altitude. While higher altitude teas are highly prized in Sri Lanka, lower altitude estates do produce some fantastic teas that have a fuller character, often full of exotic tropical notes. 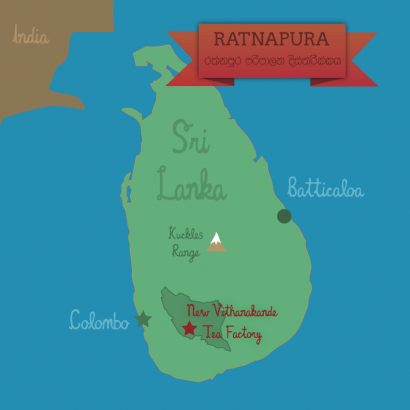 The tea farmers in Sri Lanka have had a difficult recent past, with the government encouraging more farmers to switch to CTC (crush, tear, curl) methods of tea production in the 1990’s, trying to capture the huge CTC market. CTC tea is normally used to fill tea bags, so the move was away from quality and onto quantity. This switch from orthodox methods was a big failure as Sri Lankan teas could not compete with cheaper CTC teas from other large and the then up-and-coming CTC tea growing countries, such as India, Kenya and Malawi. This move also damaged the reputation and quality of Sri Lankan tea, resulting in many farmers choosing to eventually abandon CTC production in favour of orthodox methods of tea production. Now Sri Lanka is rightly regaining its status as a major exporter of high quality orthodox teas and there are more and more interesting and exciting producers of these Ceylon teas, such as the ones from New Vithanakande tea estate.

The leaves of our Ceylon New Vithanakande Silver Tips black tea are neat, black and wiry with a distinctive silver and gold spine. The liquor produced is a very deep red colour with a light comforting aroma. It has a smooth flavour that is malty and mineral in character. The deep flavour is quite typical for Sri Lankan teas and is very appealing to those looking for a tea with a ‘British’ flavour profile. There are slightly malty and tangy notes of fruits and molasses. A pleasant level of astringency on the aftertaste completes this classic black tea.

This tea is best brewed with water at 90°C for 3-4 minutes and the leaves can be brewed around 2 times.

We really do hope that you enjoy the tea selection for November and are looking forward to the next installment for December!

If reading this has made you curious about our teas, but you don’t subscribe to a monthly tea selection, you can sign up for future tea boxes in just a few clicks. We ship worldwide from London, UK.

We always love to hear from you, so if you have any questions, suggestions or just want to chat about tea, email us at contact@curioustea.com, via our Facebook page or via Twitter.