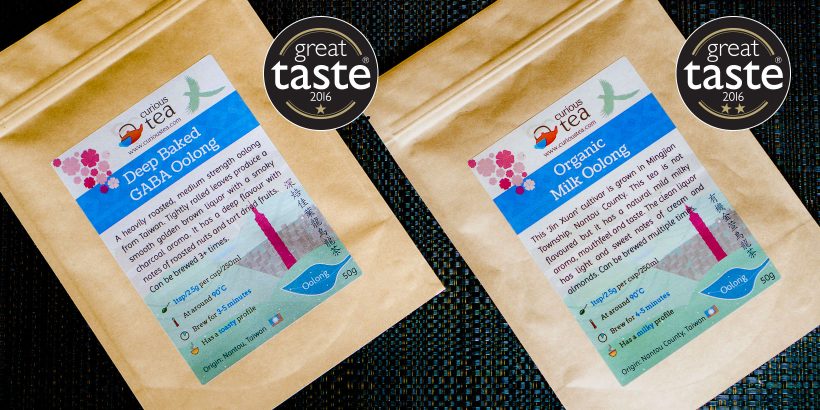 The judges thought that our Deep Baked GABA Oolong was ‘nicely roasted with nuttiness and crisp, roasty notes’, while also being ‘rich yet clean and light with some sweetness behind the roasted character’. And they particularly liked our Organic Milk Oolong, remarking that it has ‘a good colour to the infusion, which has good brassica notes but is also reminiscent of coconut water and full cream milk – yet is clean and delicate in character’.

This is the first time we have entered the Great Taste Awards and could not be more excited with the outcome! We have a close working relationship with the Tea Master responsible for these teas in Taiwan and we know that she will be thrilled with these awards. Taiwan truly produces some of the world’s finest oolongs and we are pleased to offer a wide range of Taiwanese teas in our online shop.

What are Great Taste Awards?

Judged by over 500 of the most demanding palates, belonging to food critics, chefs, cooks, restaurateurs and producers as well as a whole host of food writers and journalists, Great Taste is widely acknowledged as the most respected food accreditation scheme for artisan and speciality food producers. As well as a badge of honour, the unmistakeable black and gold Great Taste label is a signpost to a wonderful tasting product, which has been discovered through hours and hours of blind-tasting by hundreds of judges.

Recognised as a stamp of excellence among consumers and retailers alike, Great Taste values taste above all else, with no regard for branding and packaging. Whether it is bread, honey, salami or cereal being judged, all products are removed from their wrapper, jar, box or bottle before being tasted. The judges then savour, confer and re-taste to decide which products are worthy of a 1-, 2- or 3-star award.

There were 10,000 Great Taste entries this year and of those products, 141 have been awarded a 3-star, 878 received a 2-star and 2,520 were awarded a 1-star accolade. The panel of judges included; TV chef and author, Valentine Warner, MasterChef judge and restaurant critic, Charles Campion, fifth generation baker, Tom Herbert from Hobbs House Bakery, and Great British Bake Off winner, Frances Quinn; food buyers from Harrods, Selfridges, Fortnum & Mason, Harvey Nichols and Waitrose and chefs including, James Golding, chef director of THE PIG Hotels, and Kevin Gratton, chef director of HIX Restaurants. These esteemed palates have together tasted and re-judged the 3-star winners to finally agree on the 2016 Top 50 Foods, the Golden Fork Trophy winners and the 2016 Supreme Champion.

This entry was posted in News and tagged Awards, oolong, Taiwan on August 4, 2016 by Curious Tea — 2 Comments

2 thoughts on “Curious Tea is among the Great Taste winners of 2016!”

This website uses cookies to improve your experience while you navigate through the website. Out of these, the cookies that are categorized as necessary are stored on your browser as they are essential for the working of basic functionalities of the website. We also use third-party cookies that help us analyze and understand how you use this website. These cookies will be stored in your browser only with your consent. You also have the option to opt-out of these cookies. But opting out of some of these cookies may affect your browsing experience.
Necessary Always Enabled
Necessary cookies are absolutely essential for the website to function properly. These cookies ensure basic functionalities and security features of the website, anonymously.
Functional
Functional cookies help to perform certain functionalities like sharing the content of the website on social media platforms, collect feedbacks, and other third-party features.
Performance
Performance cookies are used to understand and analyze the key performance indexes of the website which helps in delivering a better user experience for the visitors.
Analytics
Analytical cookies are used to understand how visitors interact with the website. These cookies help provide information on metrics the number of visitors, bounce rate, traffic source, etc.
Advertisement
Advertisement cookies are used to provide visitors with relevant ads and marketing campaigns. These cookies track visitors across websites and collect information to provide customized ads.
Others
Other uncategorized cookies are those that are being analyzed and have not been classified into a category as yet.
SAVE & ACCEPT
Loading Comments...